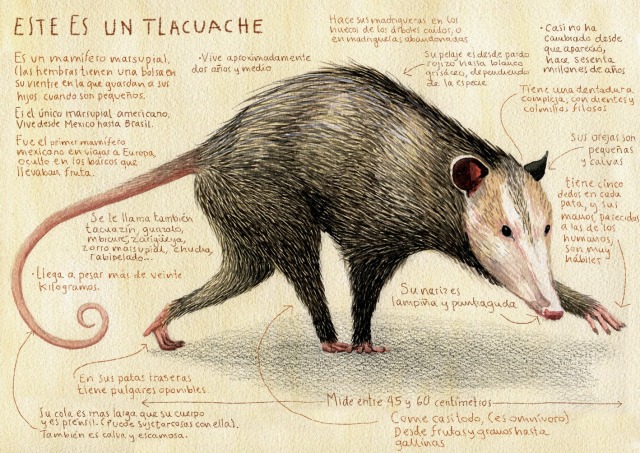 Oh, the tlacuache.  Odes could be written about this magnificent creature.  Well, maybe not odes, but they are kind of cool.  They are the backyard marsupial we all love to hate!
Here in the Rio Grande Valley, most of us pronounce the word as “tacuache,” but it is actually spelled with an L.  In English, most of us use the word “possum,” but this is actually incorrect as well.  Possums are a different species found in Australia.  What is found here are actually “opossums,” although the word is usually colloquially shortened to possum.

Their range is huge and actually covers much of North America.  They are found throughout Mexico and the southern and northeastern United States, as well as along the west coast.  They are a marsupial which means that, like kangaroos, the females have a pouch on their bellies where they carry their babies after birth as they continue to develop.
Here are some interesting characteristics about this unique species:

Most of us have had tlacuaches in our yard.  Yes, they are kind of creepy and look like giant rats with their long hairless tails and pointy snouts.  But according to the Humane Society of the United States, they are often blamed for things they do not actually do, and there are humane ways of getting rid of them, if you are determined to do so.  According to the article, they rarely tip over trash cans.  That culprit is more likely a raccoon or stray dog.  However, once a trash can is tipped over, they will clean up whatever is left over and are too slow to run away once caught.  They are not aggressive and have a very low rate of rabies, but their defense mechanism of baring their teeth and hissing makes them seem so.  They can actually be beneficial in some ways by eating insects, small rodents, and fallen fruit from trees.
However, you probably do not want one making its home in your backyard, and that is fine.  There are easy ways to discourage them from hanging around.  First and most importantly, DO NOT leave pet food sitting around.  They are just as attracted to it as your dog and cat are.  Similarly, do not leave fallen fruit or trash sitting around, because they are attracted to these as well.  Make sure all trash cans and compost containers are tightly secured.  Tlacuaches commonly use chimneys, attics, sheds, and space under houses as den sites.  You can block their access to these areas with different types of barriers.  According to official and knowledgeable people who actually study urban wildlife for a living, trapping them is not that effective.  In some states, trapping and releasing them elsewhere is actually illegal.  If for some reason you absolutely must trap one, use a single- or double-door type live trap that measures 11 x 11 x 36 inches. Bait with cracked boiled eggs, sliced apples or other fruit, or vegetables to prevent attracting cats or small dogs.