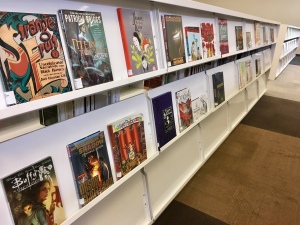 Humans have been telling stories through pictures since prehistoric times- from the earliest cave paintings, to Egyptian hieroglyphs, to Mayan pictographs.  This tradition of telling stories through pictures has never gone away, it has just evolved.  Movies are called “movies” because they are “moving pictures.”  However, stories told through printed, hand-drawn pictures are still an important part of our popular culture- they are now referred to as comics and graphic novels.  A graphic novel is just a book-length comic, and it can contain any subject matter and be written- or drawn- for any audience.  Some well-known classics are Maus and Persepolis, both of which are biographies or memoirs of political turmoil, tragedy, and perseverance. 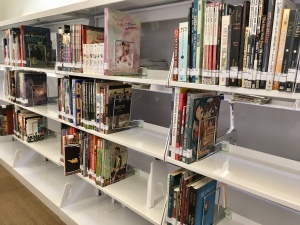 Here at the McAllen Public Library, graphic novels have always been very popular in our Teen Department.  However, there are many graphic novels that have a much wider audience than just teens and appeal to adults as well.  That is why we have a new graphic novel collection in the Adult Department at the McAllen Public Library main branch!  The collection has already become very popular, so stop by and check it out!  It is located right behind the newspapers and magazines, near the Information Desk.  Right now it is still a rather small collection, but we are very much looking forward to expanding it in the near future.  Besides our new graphic novel collection, we also offer access to Comics Plus, an app where you can read traditional comic books on your tablet or smartphone.  Just visit this page, create an account with your library card, and download the Comics Plus Library Edition app to your device.

I am no graphic novel expert myself, and am looking forward to learning more about this tradition that has been such an important part of our popular culture, and the way humans communicate, that it has lasted since prehistoric times.  While briefly looking through titles in our new collection, I discovered that graphic novels have a way of packing a much bigger emotional wallop than does text.  Both are ink on paper, but it is one thing to feel the emotional impact of the written word, and another to feel the emotional impact of something that is communicated pictorially. 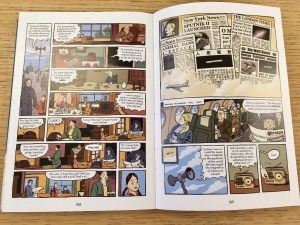 One example is the graphic novel Laika by Nick Abadzis.  It is a blend of fact and fiction, but is inspired by the real-life story of the first living creature (a dog) ever sent into outer space by the Soviet Union in 1957.  I will spare you the sad details in this post, but check out the book or read the article linked above to learn about what happened.  This graphic novel is an allegory for the struggle of what price society is willing to pay for the advancement of science, technology, and power.

However, graphic novels can have an equally strong emotional impact in the opposite direction- they can also be uplifting and inspiring.  The ability to think symbolically and communicate through pictures is one of the things that sets humanity apart from the rest of the animal kingdom.  Part of the appeal of graphic novels is that they are so versatile and use this ability to communicate any kind of story to any kind of audience.  So come and discover something new for yourself at the McAllen Public Library.