Do you ever wonder if the makers of Diehard had any idea how often other movies would borrow and steal their film’s basic premise? Final Score is another Diehard ripoff but it could also be called a Sudden Death ripoff.  Sudden Death was a Diehard rip-off, it was Diehard in a sports arena like Passenger 57 was Diehard on an airplane.

Dave Bautista, best known as Drax from Guardians of the Galaxy and other Marvel films, stars in Final Score as a former soldier who takes his “niece” (she is the daughter of a fellow soldier) to a football game in London. The stadium is taken over by Russian terrorists and Bautista’s character must save the people in the stadium.

I liked the movie setting up that the niece, Lara Peake, could defend herself in case she would need that skill later. (Spoiler: She did.) Peake and Bautista had great chemistry throughout the film. I liked the stadium official, Amit Shah, who becomes Bautista’s sidekick. He played well off Bautista, who is good in this. And I usually like Pierce Brosnan but maybe the producers should have found a Russian actor for his part. 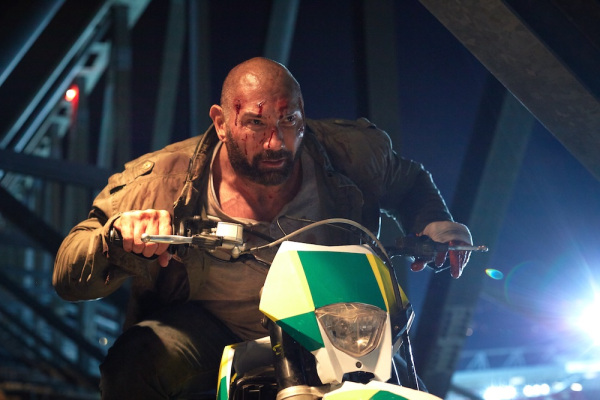 I thought the action and fighting was well staged. There is nice use of a kitchen tool in one fight and there is a fight in an elevator.

Final Score is one of the better Diehard rip-offs. The villains are ruthless and Ray Stevenson is effective as the leader of the terrorists. This is better, in my opinion, than the last two Diehard movies. This is a British film, so a review of it from a British magazine seems appropriate.

Final Score is available to borrow from the McAllen Public Library and the Lark Branch Library on DVD.