Shakedown is a 1988 action movie starring Sam Elliot as an undercover cop and Peter Weller as a lawyer. Weller has one last case before he leaves the public defender’s office and joins a corporate law firm.  His client, Richard Brooks, is accused of killing an undercover cop but Weller becomes convinced that Brooks acted in self-defense. Weller and Elliot investigate and discover police corruption.

Weller and Elliot are both good in this movie.  Maybe there could have been more character moments with them but I liked the ones they did have. Weller was best known, at the time, for Robocop and Elliot was best known as Cher’s lover in the movie Mask. 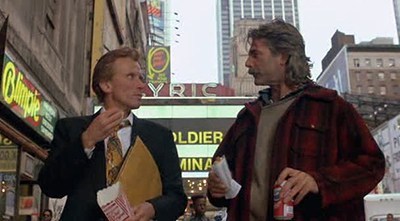 Richard Brooks, in his pre-Law and Order days, is good as Weller’s client. I liked the actress, Patricia Charbonneau, who played the assistant DA and a former romantic partner of Weller. The actress playing Weller’s disposable fiance (Blanche Baker) was also good. Disposable fiances were often seen in 1980’s and 1990’s movies, but usually in romantic comedies.

The stunts are good. One sequence has a cab driver going to extra lengths to ensure Weller gets his day in court. (That made me smile.) There is a fight on top of a roller coaster.  At the end of the film, our heroes are chasing a plane in a car and Elliot leaps from the car to the plane.

Roger Ebert gave this a positive review but not a glowing one.  I am not saying this is a forgotten classic, but if you like Weller and Elliot, you will probably enjoy this movie.

The Lark Branch Library has a copy of Shakedown on DVD available to borrow.